The Jim Clark Motorsport Museum re-opened to the public on Saturday 15th May 2021. 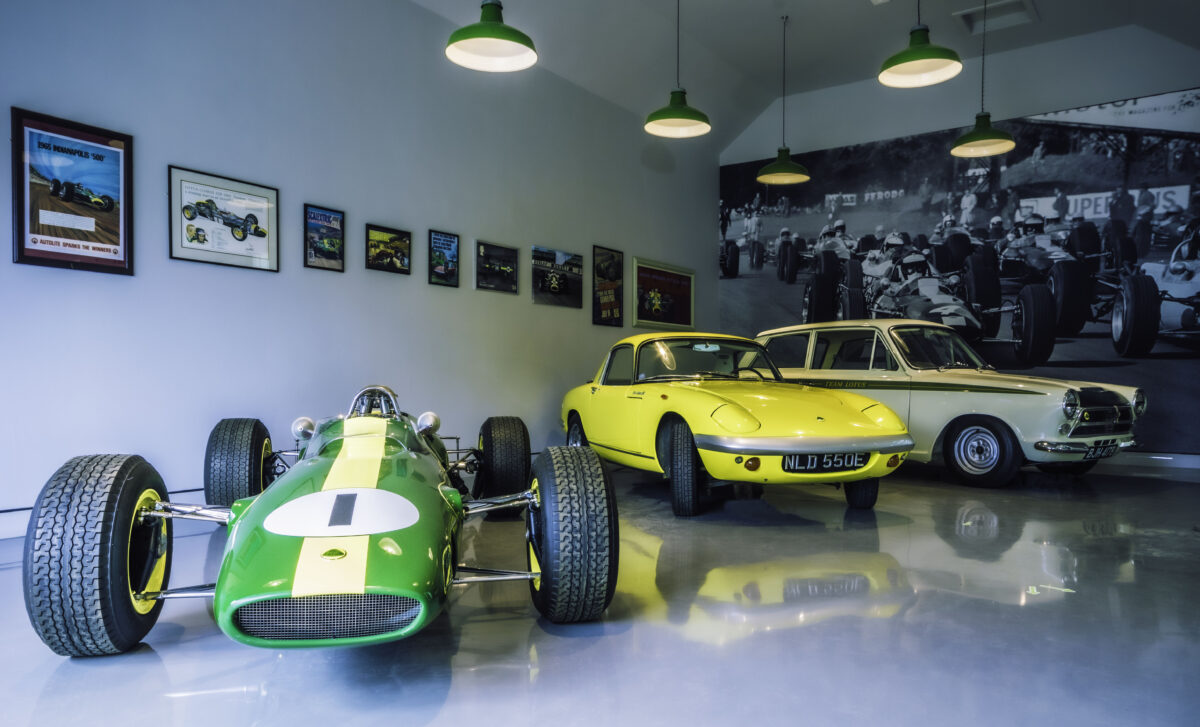 Photograph courtesy of A. Tulloch.

The Jim Clark Trust are delighted that The Jim Clark Motorsport Museum is now back open and welcoming members of the public once again. We are delighted to welcome Jim Clark’s 1967 Lotus Elan to the museum courtesy of current owner Peter Windsor, to complete a rather famous-trio of Clark cars.

Read a brief history of the Elan:

This yellow Lotus Elan S3 Coupe (British Registration NLD 550E) was officially handed over to Jim Clark by Lotus Cars (Sales) Ltd on March 22nd, 1967. Because Jim gave up his UK residency over the Winter of 1966/67 (due to new British tax laws) it was built in left-hand-drive form for Jim’s Continental use. The total cost of the car (borne by Team Lotus!) was £1,504/13 (fifteen-hundred and four pounds, 13 shillings), including special equipment mods: intertia-reel seat belts, cigarette lighter, a radio, 4-months road tax (why not 12?) and a cassette tape recorder. Although the bill was sent to Jim’s new apartment in Pembroke, Bermuda (to which he had sent furniture from his Edington Mains farmhouse near Chirnside, Scotland). In reality, the Elan lived at the Paris flat of Jim’s friend, the journalist and Lotus confidante, Gerard “Jabby” Crombac (110, Rue de Sevres, 75 Paris 15th). This flat became Jim’s ‘home’ for the bulk of the 1967 season. 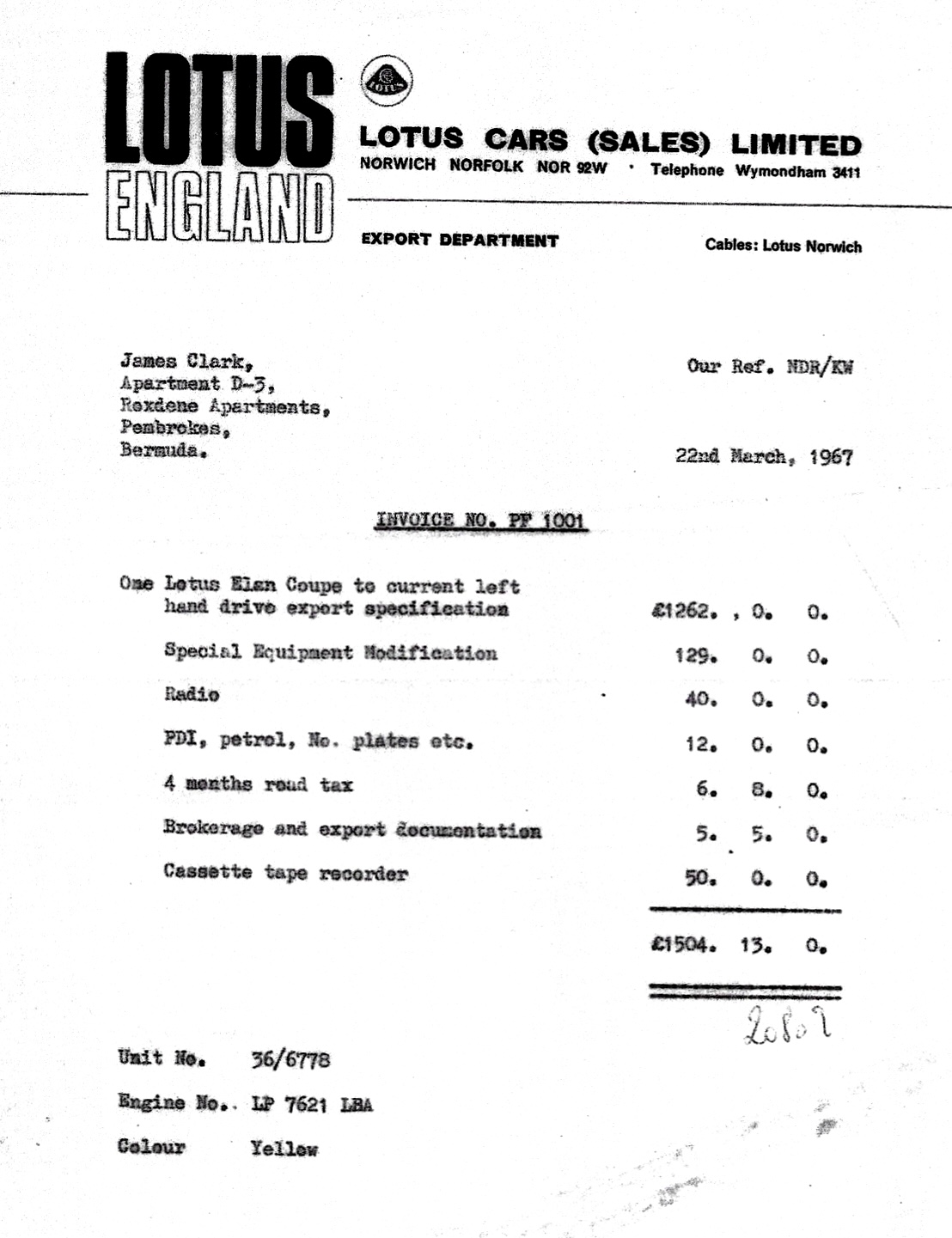 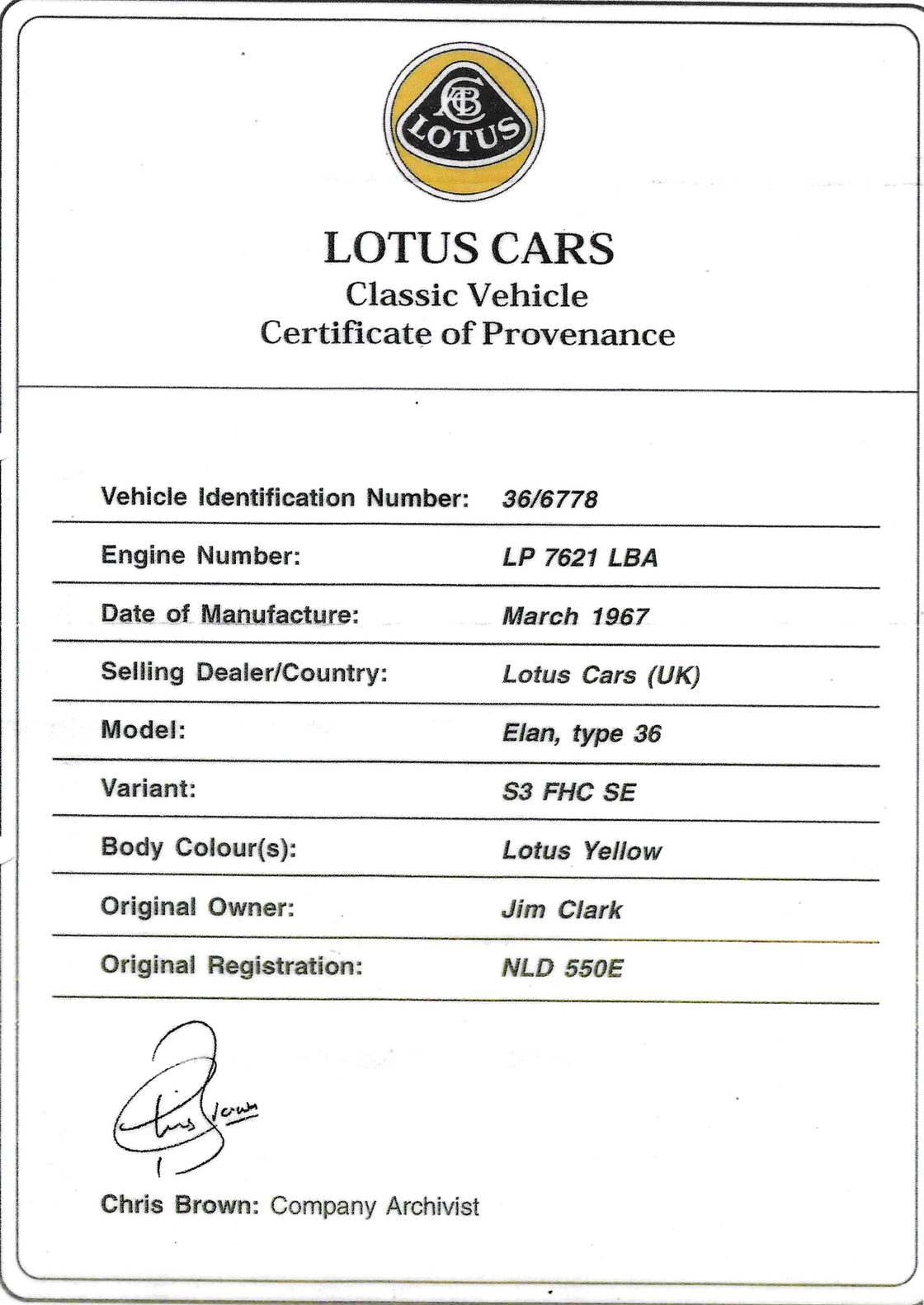 Jim drove the Elan to many European races in his crowded race calendar that year- the Dutch, Belgian, French and German GP’s and to the Reims and Rouen F2 races- and reportedly loved every minute of the journeys. Some idea of his love for the car can be gained by a letter he wrote to Jabby during the 1968 Tasman Series. On the eve of the International 100 at Warwick Farm and with his head full of Lotus 49s, the new Gold Leaf Sponsorship, troubles with the Confederation of Australian Motor Sport and his main opposition, Jim took the trouble to say,

“One other thing occurs to me. The log-book for the Elan and insurance certificate are in the glovebox, both of which should be returned to Andrew (Ferguson) so that he can get the license renewed.”

As it happened, Jabby did renew the license as instructed and a few weeks later drove with Jim in the passenger seat of the Elan to a small airport on the outskirts of Paris. “There,” said Jim, handing him the keys. “The car’s yours. Keep it. “I’m getting a new Plus-2 so you can have this one.”

With that, Jim flew off to Hockenheim…

Jabby kept the Elan almost for the rest of his days. Shortly before he died, however, in late 2005 he passed on the car to Peter Windsor, the F1 journalist and driver/team manager who was lucky enough to spend time with Jim in Sydney in March, 1968. In a short-handwritten note to Peter, Jabby said this:

“I hope you will enjoy her as much as Jimmy. Remember, he used to say, ‘On the continent I have re-discovered the joy of driving’. He was using his plane a great deal less”

Upon the Elan entering the museum, owner Peter Windsor remarks:

“I can’t think of a better place for the Elan to be living right now than in the Museum, flanked by those two wonderful Clark racing cars. The yellow is the exact Pantone in which Jim ran the car and sits beautifully, I think, with the green of the 33 and the cream of the Lotus Cortina. Needless to say, this particular Elan is a joy to drive.  It was built with special care by the factory in late 1966 and has been perfectly maintained ever since. It’s perhaps difficult to imagine Jim placing his track bag in the boot of the Elan before setting off for the Nurburgring, Spa or Zandvoort in 1967 – but that is what he did. He just focused on the things he loved about the motor racing life – the driving, the cars, the people, the circuits. Glamour never came into it. His priorities were absolutely pure. That is what he was all about. And that is why he will always be remembered as one of the greatest drivers in the history of the sport.”

The Elan will remain resident in The Jim Clark Motorsport Museum until at least the end of 2021.

Commenting on the addition of the Lotus Elan to the museum, Trust Secretary Liam Howel said:

“We are all delighted that the museum is back open after what has felt like a very long time. The last 12-months have been very difficult for everyone globally so to have some positive news locally has really lifted our spirits. There are some fantastic new additions and improvements to the museum, none more so than the entry of Jim’s European Elan. We are very thankful to Peter (Windsor) for lending the car to us. I urge you to visit!

Thank you for your ongoing support.