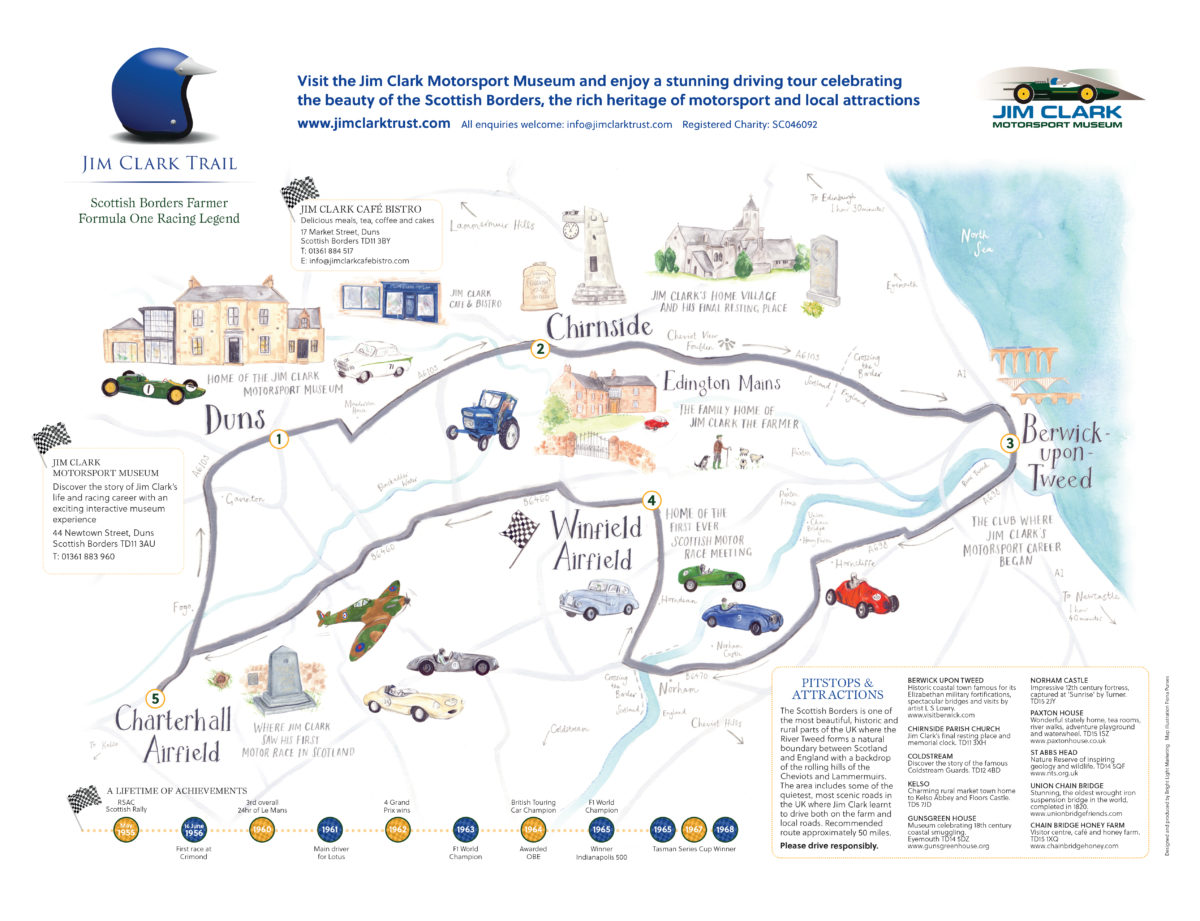 Ahead of the new Jim Clark Motorsport Museum opening from 1 March a new driving adventure has been announced by The Jim Clark Trust. The Jim Clark Trail is a 50 mile scenic driving tour celebrating the beauty of the Scottish Borders, the rich heritage of motorsport in the area and cultural local attractions.  The new initiative aims to enhance the experience of visitors to discover the places and stories behind the double Formula One World Champion and famous Berwickshire farmer, Jim Clark.

The Scottish Borders is one of the most beautiful, historic and rural parts of the UK where the River Tweed forms a natural boundary between Scotland and England, with a backdrop of the rolling hills of the Cheviots and Lammermuirs. The area includes some of the quietest, most scenic roads in the UK where Jim Clark learnt to drive both on his farm and local roads. It is also steeped in motorsport history with the former WWII Airfields of Winfield and Charterhall, once famous racetracks in the 1950s and 1960s that influenced Clark’s early career. A download of the trail map is available from today at www.jimclarktrust.com

The Jim Clark Trail starts and finishes at the new Jim Clark Motorsport Museum in Duns where visitors can discover the story of Clark’s life and racing career with an exciting interactive experience, featuring trophies, memorabilia, film, imagery and two of his iconic race cars. The route leaves Duns to visit Clark’s home village of Chirnside, his gravestone and memorial clock, then crosses the border from Scotland to England with panoramic views of the landscape, to the historic coastal town of Berwick Upon Tweed famous for its Elizabethan fortifications and visits by artist L S Lowry. It continues on a loop following the majestic River Tweed to Norham’s impressive 12th century stone fortress or a visit to the Union Chain Bridge, the world’s oldest wrought iron suspension bridge completed in 1820. The route returns back over the Scottish border to discover the history and heritage of Winfield and Charterhall via the Richard Hillary RAF Memorial before returning to the museum in Duns. It was at Winfield and Charterhall, once graced by a who’s who of motor racing including Stirling Moss, Nigel Hawthorn, Roy Salvadori, Guiseppe Farina, Reg Parnell and Jackie Stewart, that Clark honed his remarkable natural driving skills with Berwick & District Motor Club and Border Reivers before joining the Lotus Grand Prix Team.

“The Jim Clark Motorsport Museum is fast becoming a magnet for classic and sports car enthusiasts. The Jim Clark Trail is an exciting new adventure for all visitors, on a far more modest scale to the North Coast 500, a stunning driving tour celebrating the rich heritage and culture of the Borders.” said Ben Smith, Chair of The Jim Clark Trust.

Jim Clark was admired and respected around the world not just for his remarkable success winning the Formula One World Championship in 1963 & 1965 and the Indianapolis 500 in the same year, but also for his sportsmanship and humility. He was a shy farmer at heart who was always happiest at home on his farm at Edington Mains. The Jim Clark Trail reveals insights on culture and history that highlights the stark contrast in Clark’s life from rural farming to the danger and glamour of motor racing in the 1960’s. “He was the best. Shy almost introverted, modest, he was a Borders farmer after all. And he never stopped being a Borders farmer.” Once recalled Sir Jackie Stewart OBE, Honorary President of the Trust.

Visitors to the Museum and Trail can refuel at the Jim Clark Café Bistro. Or extend their driving adventure to include neighbouring Border market towns such as Coldstream, Kelso, Melrose, Jedburgh and Hawick famous for castles, abbeys, textiles, common riding and beautiful open roads. A key message to all visitors is to please drive responsibly. Organised Car Club tours are also being offered by the Trust. The Trail is announced with an illustrative map available to download from a new website and online shop www.jimclarktrust.com ahead of the new museum opening from 1 March through to the end of October.

The Jim Clark Trail aims to help promote and support tourism in the local area to benefit from thousands of visitors to the new museum this spring and summer capturing the spirit of the Jim Clark story. The Trail is free to visitors with a detailed tour guide with satnav codes and insights available from the museum and café bistro. The Trust are collaborating with Scottish Borders Council, Live Borders and the Midlothian Borders Tourist Action Group to help support the new #ScotlandStartsHere campaign. Local tourism and businesses are encouraged to get in touch to help develop trail, please contact info@jimclarktrust.com.

For further information, map and images:

Read more about '‘The Unforgettable Jim Clark’ by Peter Windsor: Alex Maskell (Series 3 of 4)'
View All