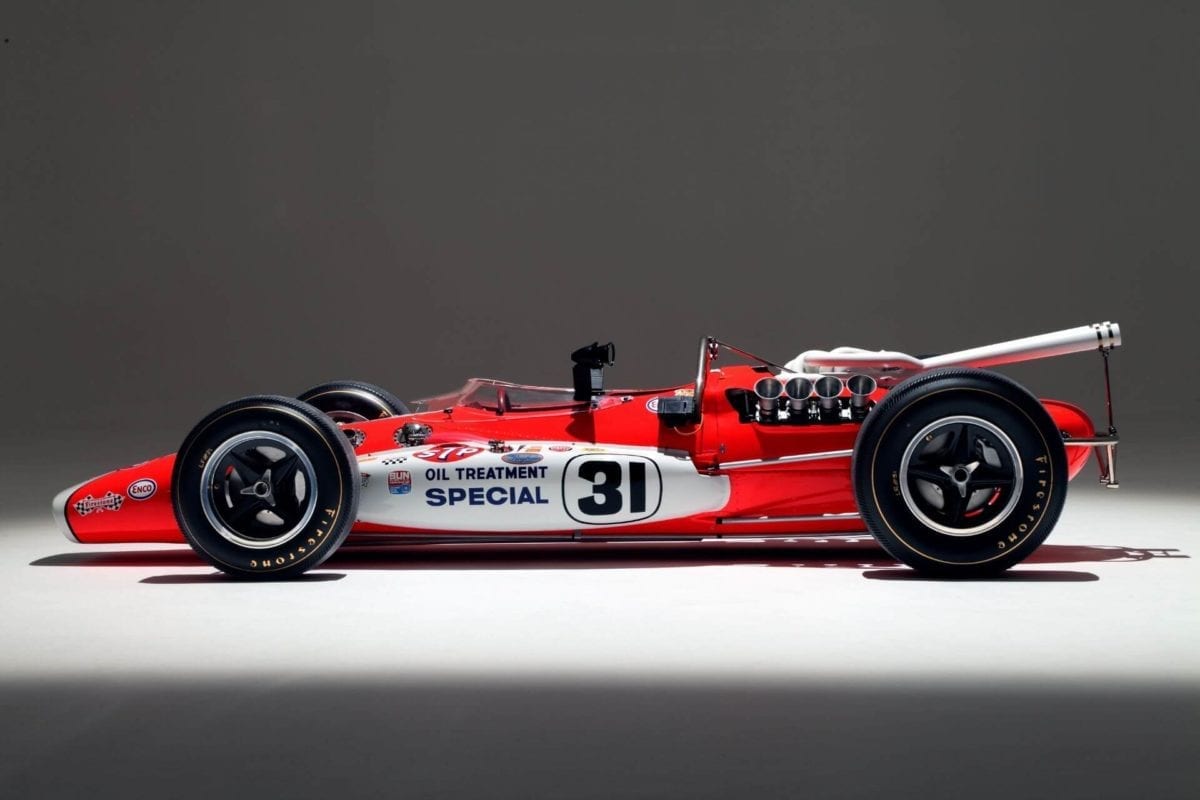 Jim Clark was famous for winning two Formula One World Championships in 1963 and 1965 and the Indianapolis 500 in the same year. He remains the only racing driver to win both titles in the same year. Only eight Lotus 38’s were ever built, designed by Colin Chapman and Len Terry with Lotus, it was the first rear-engine race car to win and revolutionised the Indy 500.

Commenting at the time of the award the RAC Historic Award judges referenced ‘the remarkable attention to detail and quest to return the Lotus Type 38/7 to 1967 Indy 500 specification. The dedication to finding original parts to return the car to the correct asymmetric suspension, two speed ZF transmission and accurate livery is truly inspirational.’ In 2016 the Lotus Type 38/7 was acquired from Japan by Nick Fennell. The 38/7 was outstandingly original but in overall poor condition. Nick Fennell had the car fully restored to exactly to the 1967 specification with the objective of celebrating and preserving the race car for Jim Clark and Team Lotus history.

In addition to exhibiting the Lotus Type 38 in the future, Nick Fennell confirmed a significant donation to The Jim Clark Trust charity which helps fund and operate the new Jim Clark Motorsport Museum in partnership with Scottish Borders Council and Live Borders. The Trust, run by relatives of the Clark Family, is dedicated to celebrating the story of Jim Clark and activities focused on heritage and education to inspire future generations.

Commenting on the Lotus Type 38 and donation, Chair of The Jim Clark Trust, Ben Smith said:

“We are extremely grateful to Nick who has been a great supporter of the Trust and plans for new museum in recent years. The Lotus Type 38, first unveiled at last years’ Goodwood Festival of Speed 2019 in its red and white livery, is truly stunning and beautifully restored. We are delighted to explore exciting plans to display this historic race car in the new museum and perhaps combine with any Indy 500 exhibition. We would like to sincerely thank Nick for his support and generosity, helping to promote the legacy and inspiration of Jim Clark.”

Commenting on the collaboration and support, Nick Fennell said:

“I am thrilled to again be working with The Jim Clark Trust. The Jim Clark legacy is strong thanks to the tireless efforts of the Trust. I support them wholeheartedly.”

The new £1.7m Jim Clark Motorsport Museum was officially opened in August 2019 by the Trust’s Honorary President Sir Jackie Stewart OBE, following six years of planning and fundraising. In its first four months the new museum welcomed over 12,500 visitors. The museum is home to a unique collection of Jim Clark memorabilia, including over 100 trophies, archive film, imagery, a gallery, shop and classic car race simulator. The star attractions are two of Jim Clark’s former race cars, a Lotus Cortina and Lotus Type 25. The museum opens from 1st March through to October and is a must for all motorsport fans and a great day out for all the family. The Jim Clark Motorsport Museum is a partnership project funded and supported by Heritage Lottery Fund, Scottish Borders Council, Live Borders and The Jim Clark Trust.