In a fitting tribute to one of the most successful racing drivers of all time, the Jim Clark Trust has launched a competition to win the 100,000th Lotus sports car built – a one-off Jim Clark Special Edition Lotus Evora GT410 Sport.

Commissioned in honour of the 50th anniversary of 1968, this ultimate prize for enthusiasts was unveiled by the Duke of Richmond, a Patron of the Trust, with Group Lotus Chief Executive Feng Qingfeng and Trustees of the charity at the world famous Goodwood Festival of Speed.

The competition to help raise funds to support plans for a new Jim Clark Museum is now live online at www.jimclarklotus.com, offering participants the chance to win a truly landmark special edition Lotus Evora GT410 Sport. It costs just £20 to enter, with the winner to be announced at the opening of the new Jim Clark Museum in Duns, Scotland, in summer 2019.

Proudly supporting the Trust, the British sports car manufacturer Lotus has designated the Jim Clark Special Edition its 100,000th car to celebrate the motoring racing legend, and production of the unique model coincided with Lotus’ 70th anniversary celebrations at this year’s Festival of Speed. 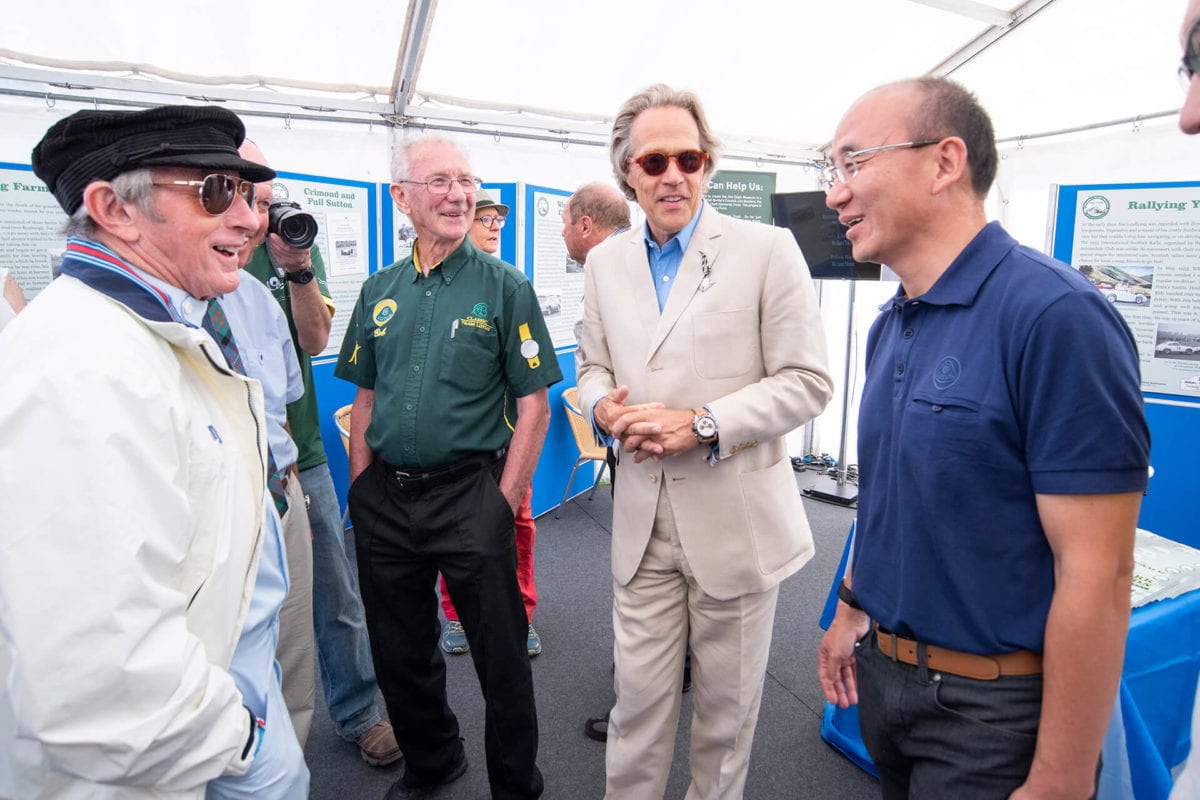 His Grace the Duke of Richmond commented:

“It’s fantastic to see the crowds here at the Festival of Speed so engaged and excited to remember Jim Clark and celebrate his achievements in our Silver Jubilee year. The stunning Jim Clark Special Edition Evora is a fitting tribute to a legendary man and his iconic Elan. Clark’s exploits on track were very special indeed and we are proud to launch this competition here at Goodwood.”

Inspired by the red Lotus Elan S2 driven by Clark in the 1960s, registration number 997 NUR, the new Evora GT410 Sport has been hand built at Lotus’ Hethel site – the home of the company for the last 50 years. Echoing the original car’s colour scheme, with red paintwork, a silver roof and silver wheels, plus tartan upholstery, it commemorates the legacy of one of motorsport’s most enduring figures. The car also carries Clark’s signature on each rear buttress. 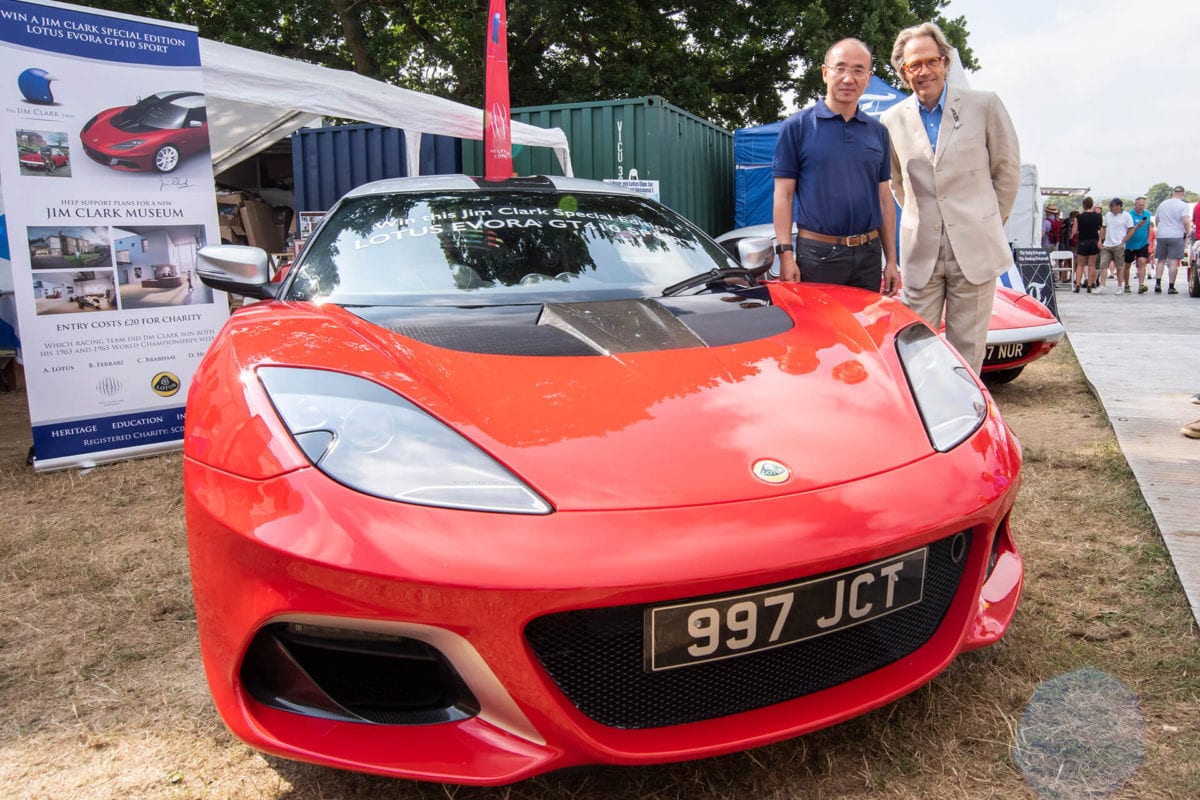 Entrusted to the Formula 1 World Champion by Lotus founder Colin Chapman, the first production Lotus Elan S2 (type 26, Chassis 001) was Clark’s company car, and he regularly made the commute from the racing team’s then base in Cheshunt, just outside London, to his family home in Duns, in the Scottish Borders. A trip of roughly 350 miles each way, Clark clocked up around 15,500 miles in a year, leaving the car with the team when he was away racing.

Launched in Lotus’ 70th year, the stunning Evora GT410 Sport is a winning blend of raw ability and style. Drawing from its more potent stablemate, the Evora GT430, it incorporates many high-performance elements yet retains a subtler, understated profile. The Evora GT410 Sport is powered by a specially calibrated and tuned higher-output version of Lotus’ supercharged, 3.5-litre 6-cylinder engine. With an integrated water-to-air charge cooler, it produces 410 hp at 7000 rpm and 420 Nm of torque from 3500 rpm, allowing the Evora GT410 Sport to sprint from 0-60 mph in just 3.9 seconds. 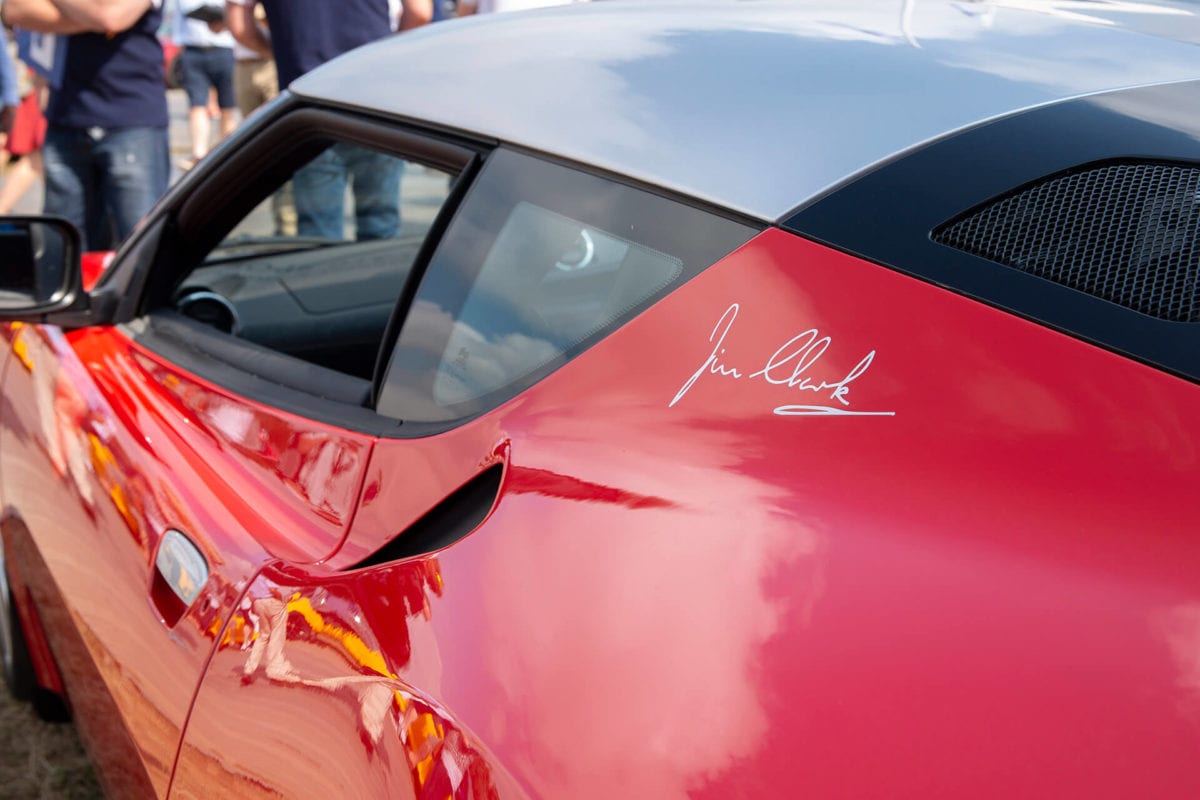 Continuing a lineage of lightweight car design, that can trace its roots back to Clark’s 1960’s Elan S2 and beyond, the development of the Evora GT410 Sport allowed Lotus the opportunity to optimise mass, resulting in a lightest possible dry weight of just 1,256 kg. Standard carbon fibre composite components include the front access panel, roof panel and a one-piece louvred tailgate with integrated spoiler, as well as the elements within the front air blade system and rear wheel exit ports. In keeping with Lotus’ philosophy of maximising aerodynamics to match the car’s personality, the GT-class coupe generates up to 96kg of downforce, providing better handling and stability at high speeds.

“Over the past five years we have been delighted to see the plans for a new Jim Clark Museum become a reality, and are extremely grateful for the support of Scottish Borders Council, the Heritage Lottery Fund and thousands of public donations. The build programme for the new £1.6m museum with space for two cars began in early July and is estimated to take 12 months. We are excited to announce this new fundraising competition to win the Jim Clark Special Edition Lotus Evora, which will help to realise the vision of an extension to increase the numbers of cars on display and promote heritage, education and inspiration for future generations. Best of luck to everyone who enters.”