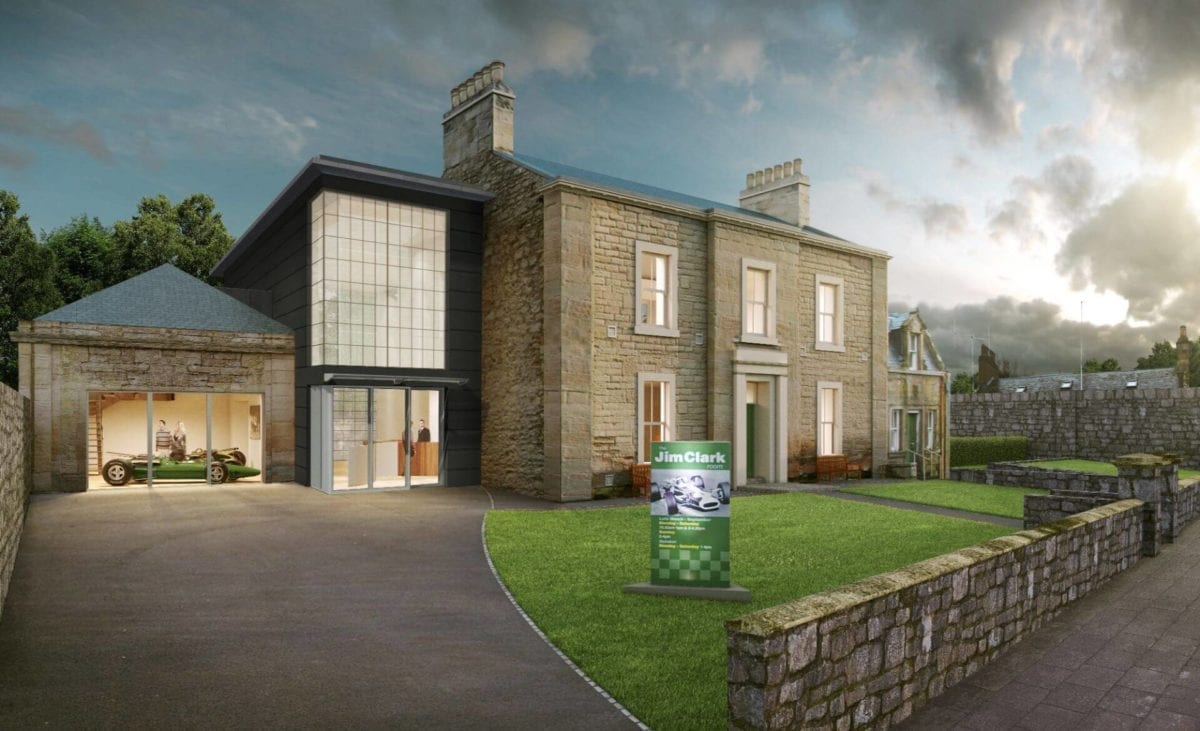 Marking the 54th anniversary of Jim Clark’s historic win at the Indianapolis 500 this week, Scottish Borders Council, charity Live Borders and The Jim Clark Trust are delighted to be able to announce that the new Jim Clark Motorsport Museum in Duns will open to the public on Thursday 11 July.

On 31 May 1965, Jim Clark won the Indianapolis 500, becoming the first driver to do the double of winning the famous American race and also the Formula One World Championship. He went on to win a second World Championship in 1965, and remains the only driver to win both in the same year.

The £1.6m museum project is being taken forward by the Council in partnership with Live Borders, The Jim Clark Trust and the Jim Clark Memorial Room Trust. Funding has come from the Council, the Heritage Lottery Fund, Museums Galleries Scotland and The Jim Clark Trust, the latter including a grant from the Fallago Environment Fund and individual donations from around the world.

“Work is progressing well on the new museum, with Live Borders now on-site to complete the internal fit-out and prepare the exhibitions.

This project has been almost five years in the planning and in just six weeks we will have a fantastic new museum open to the public which will really do justice to Jim Clark’s incredible achievements in the racing world and also his life as a Borders farmer.

The new museum will be a fantastic addition to the tourism offering in Berwickshire and will provide an economic boost for not just the immediate area but also the wider Scottish Borders.”

“Jim’s replica Indianapolis 500 trophy will be on display in the new museum alongside new items, film footage and photographs to showcase Jim’s inspirational career.

A huge amount of work has gone in to researching and preparing the collection for display and I’d like to take this opportunity to thank the volunteers who have assisted the Jim Clark Motorsport Museum team with this task. We can’t wait to start welcoming visitors.”

In conjunction with the opening of the new museum, The Jim Clark Trust is working on the development of a tourist trail around the area, taking in locations associated with Jim Clark, such as historic racing venues and his grave at Chirnside Church.

Ben Smith, Secretary of The Jim Clark Trust, which helped raise over £300,000 towards the museum project, said: “Jim’s victory at Indianapolis in 1965 expanded his fan-base massively and we have no doubt that fans from across the world will descend on the new museum after it opens this summer.

“All the partners are working to maximise the impact of the interest in Jim and the opening of the new museum, and as part of that the Trust is developing a tourist and car club trail that will provide additional interest for visitors, and also bring many car enthusiasts to the museum for many years to come.”