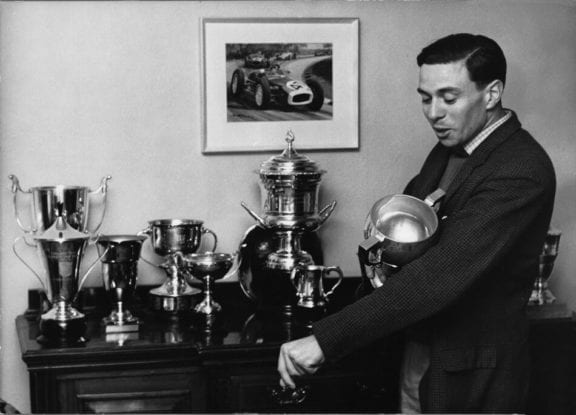 Duns and the wider Scottish Borders gave a warm welcome to a spectacular gathering of F1, touring and sports cars at The Jim Clark Weekend on Sat 16 and Sun17 May to mark the 50 year anniversary of Jim Clark remarkable 1965 season – during which he clinched his second Formula One World Championship, a famous Indianapolis 500 victory, the Formula 2 Championship and the Tasman Championship.

The Jim Clark Weekend, organised by the Jim Clark Trust in partnership with Club Lotus, brought together a glittering fleet of priceless classic race cars rarely seen in Scotland to pay tribute to Clark’s unique achievement and kick-off the fundraising drive for an expanded £1.2m museum to showcase the cars in which he raced and the story behind his career and life.

A start-up grant from Scottish Borders Council helped enable the Trust and Club Lotus to plan the event, but it was Duns and a wide range of local businesses that the organisers had to thank, with a small army of volunteers including Reston Young Farmers, that embraced the event and without whom the weekend would not have been possible.

“Simpsons Malt works in partnership with farmers, and of course Jim Clark tended the land as well as achieving greatness on the circuit. It is therefore highly appropriate that my family business sponsor this celebration of achievement in an area where a number of our farmer growers and merchanting customers are based. We are therefore very proud to be associated with this event.”

Hugo’s Café celebrated with cakes to commemorate 1965 for the visiting car owners and Jim Clark’s engineer Bob Dance’s 80th birthday, while staff at the local Co-Op got into the spirit by dressing as mechanics to support Radio Borders Super Hero day – with Jim Clark being their Super Hero. A. Hume Country Clothing provided tweed flat caps in tribute to Jim Clark creating the link between classic clothing and classic cars, a theme adopted by many of the crowd on the day.